League One accumulator tips for this weekend’s Saturday afternoon 3pm fixtures including the reasons for each tip and the best bookmakers to use on the bet. We’ve picked out three bets which will hopefully boost our betting balance this weekend.

We use William Hill for our League One best betting tips because we can pre-populate the betslip for you, meaning you don’t have to add each selection in by yourself. If you need an account with them, you’ll also get their bet £10 get £30 in bonuses sign-up offer to spend this weekend on any other division. 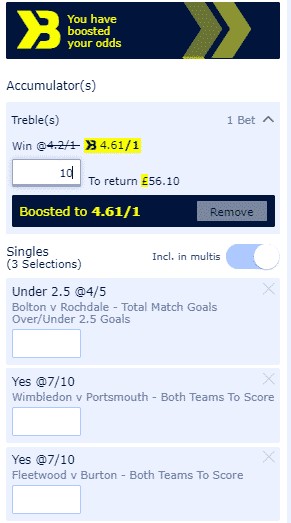 Bolton vs Rochdale – Under 2.5 Goals

Bolton have been excellent since Keith Hill and David Flitcroft took over and they have become very difficult to beat. Unfortunately, they are several points adrift and goalless draws aren’t going to aid their cause. The Trotters were very good against Blackpool and probably could have won their game, but their lack of firepower is costing them. Having not played last week, they’ve had a fortnight to prepare for this local-ish derby with Rochdale. The men in white have conceded just two goals in their last four matches, although they’ve registered just a single strike in that period. They come up against a Rochdale side who haven’t travelled well this season and are conceding goals for fun on the road. Brian Barry Murphy likes his side to play a possession game and that has held them back at times. They keep hold of the ball well although coming up against a stiff defence could see them restricted somewhat. Rochdale have scored nine times on their road, although two thirds of those arrived in August and they’ve struggled to replicate those heroics since.

Wimbledon vs Portsmouth – Both Teams to Score? Yes

Wimbledon have suddenly hit form and they arrive into this fixture having netted nine times in their last three games. They’ve also found the back of the net in twelve of their thirteen games this campaign and look set to continue that record here. Unfortunately, they can’t defend and they’ve shipped nine times in their last four encounters. August 31st was the last time that they managed to keep a clean sheet and it seems an unlikely prospect in this game. Pompey were underwhelming last weekend against Gillingham although they out-shot their opponents 12-6 and had the majority of the play. They’ve scored in three of their last four League One away days and they should be able to find a way past a flimsy Wimbledon back-line.

Fleetwood vs Burton – Both Teams to Score? Yes

Until a fortnight ago, Fleetwood had found the net in every single home match. The Cod Army were defeated 1-0 by a classy Ipswich side and having not played last weekend, they’ll be keen to get back to winning ways. Joey Barton’s men offer a threat going forward and have a number of players who are likely to get on the score-sheet. 50% of their home games at Highbury have ended 2-1 to the hosts whilst Wycombe held them to a 1-1 draw at the end of August. Burton have been better on the road this season and unusually, this is their fourth consecutive contest away from the Pirelli. The Brewers have found the net in five of their six matches on the road this campaign and are fresh from hitting three past MK Dons. They don’t have a great record at this stadium and tend to struggle on the Fylde Coast, however they should at least be able to register this weekend.

If you open a new William Hill account and bet £10 on our Championship betting tips this week, you will get £30 in free bets to use across the rest of the weekend. This is in addition to any winnings you get if your bet is a winner. Join William Hill using the steps below:

Read More: We’ve also got the best bets from  League Two this weekend.