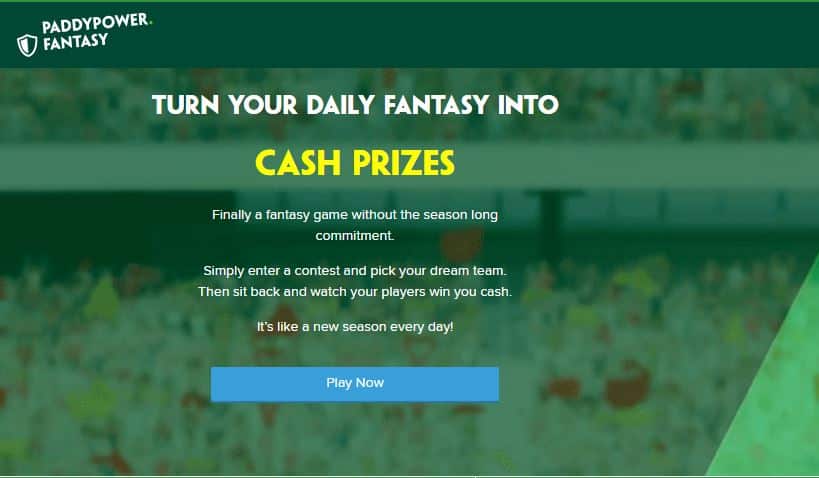 Everybody is familiar with the traditional Fantasy Football format, but not Paddy Power have gone one step further and you can play for cash prizes every day, on a variety of sports including football, NFL, NBA and golf.

The big difference with this Fantasy Football is that you can change your team before each game you enter. For example, you pick your FPL team for the upcoming Premier League weekend, sure of a big points haul, only for Sadio Mane, Raheem Sterling and Sergio Aguero all to score 0 points. Don’t worry, before the next game you enter starts, you can replace them with Jamie Vardy, Mo Salah and Kevin De Bruyne if you wish.

Every day is a new game on Paddy Power Fantasy Football and you can give it a try with this risk free £20 to join a game.

You need a Paddy Power account to play this game and if you need to open one, we have got hold of a £20 risk free first bet for you – this means if you fail to win any money on your first game, you’ll get the cost of that game refunded back to you, in cash.

Once you have got your Paddy Power Fantasy account loaded and ready to go, head into the lobby of the sport you want to play on, and then pick the game that suits you. There will be daily games where you play against other Fantasy Football players and if you win the league, you take their cash.

Paddy Power Fantasy offers a range of different games – from tournaments that offer life-changing top-prizes, to head-to-head contests where it’s winner-take-all between you and another punter, and even games where you only have to finish in the top half of players to win!

If you fail to win, you won’t be stuck with the same players for the next game you enter, you can change as many players in your team as you want.

If you play Fantasy Football already, you will know that there are not many places where you can win money for doing well, especially in a weekend game or even just in one day. Paddy Power Fantasy changes this. There are even head to head matches where you play against one other person and the person with the highest points in the game that day takes the prize pot.

There are also some bumper Fantasy Daily leagues with prizes of up to £60,000 up for grabs.

There will be Fantasy Football for cash tournaments on each day, you just need to head to the Paddy Power Fantasy Football page and click on ‘EPL’ if that’s what you’re looking for. From there you will see the lobby of all the games taking place today, starting soon and currently taking players. 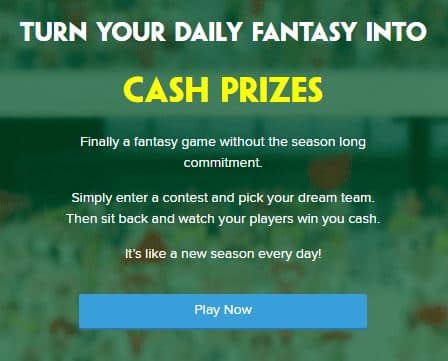 Types of games to play on PP Fantasy Football

Beginner Contests – if you’re new to Fantasy Football you can compete with fellow beginners to get started.

3-100 players – compete against fewer players for a better chance of winning money.

Head to Heads – Compete against one other person – winner takes all.

Multipliers – double your money or play for more.

Beat the Score – The prize money is shared evenly across all the winners.

Tournaments – these are high paying contests with guaranteed prize pools.

Sign-up to Paddy Power Fantasy to see the current games

When it comes to scoring points on Paddy Power’s Fantasy game, this is different to any of the other Fantasy Football products you have likely used before. There are points available for different things and the number of points doesn’t necessarily depend on a player’s position.

Defenders get clean sheet points (5) but midfielders and forwards do not.

A goalkeeper gets 10 points for a clean sheet.

If you have never used Paddy Power before, you’ll be entitled to a £20 risk free go on PP Fantasy Footy. This means if you fail to win any money in your first contest, you’ll get the cost of entry back, up to £20. 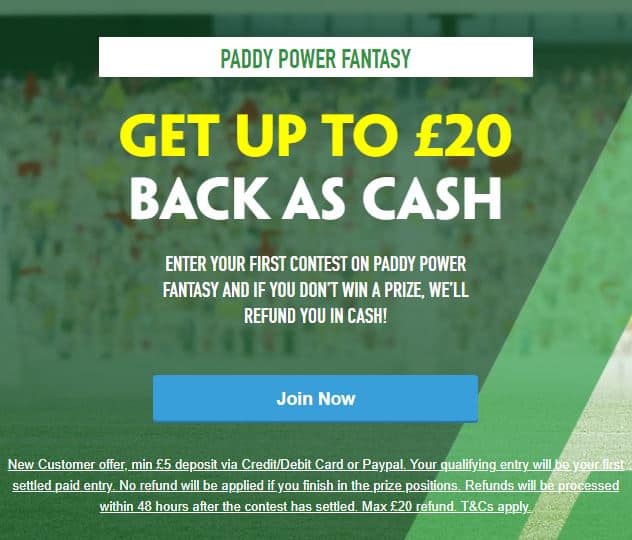