Free football accumulator tips and predictions for this Saturday’s coupon including football betting tips from the Championship, Scottish Premiership and FA Cup first round.

We use Coral for our betting tips because as well as having good odds and a great sign-up offer, you will also get a 10% boost to any winning footy acca. For example:

Bet £10 on this accumulator

Although they have been beaten just once in seven Championship outings at Ewood Park, Blackburn have not been great travellers this term and they have suffered three consecutive away defeats since early October. A visit to Leeds now awaits and the hosts have lost only one game at Elland Road this season when conceded a very late winner during a 1-0 defeat by Swansea. The Yorkshire team have also won their last three home fixtures without conceding a goal and could claim another victory.

Since beating Reading 1-0 at the Riverside Stadium during early September, Middlesbrough have been winless in eight subsequent Championship fixtures and have netted no more than once in any of those matches. Boro have also failed to find the net in their latest four games as they prepare to visit a QPR team which lost 2-0 at Leeds last time but which scored ten goals in four prior games. Rangers can be an inconsistent outfit, but they have won five league matches since late August and are capable of claiming a sixth on Saturday.

After beating Livingston 2-1 on home soil at the end of September, Hamilton have remained winless in subsequent Scottish Premiership games and have also yet to register an away victory in league action this season. Eight goals have been conceded by Accies in their last two contests on the road and they now visit a Kilmarnock team unbeaten at Rugby Park since a 2-1 defeat by Rangers on the opening weekend. Although Killie have lost their latest two matches, they could seal a third successive home win this weekend.

Three successive National League defeats at the beginning of October led to the departure of long-serving AFC Fylde boss Dave Challinor and they have stayed unbeaten in four subsequent matches. With the experienced Jim Bentley now appointed as manager, Fylde will be seeking further progress in the FA Cup and they visit Nantwich in this First Round tie. The hosts operate two levels below the Coasters in the football pyramid but can be an inconsistent outfit having won just three of nine previous games in their Northern Premier League division. An away victory is predicted.

Having suffered just one competitive loss since late September, Eastleigh will be hoping that their decent National League form can be transferred to this FA Cup First Round tie. The Spitfires have netted four goals apiece in winning two of their last four matches and now visit a Stourbridge outfit playing at level 7 in English football. After a decent start to their Southern League campaign, the Glassboys have won just twice in six outings with no clean sheets registered since late August. Eastleigh should be capable of beating their lower league opponents.

Get FOUR £10 Accumulators for the price of one

Join Coral today and as soon as you bet £10, you will get 3 free £10 bets added to your account. This means you could bet on all of the following for just £10 this weekend: 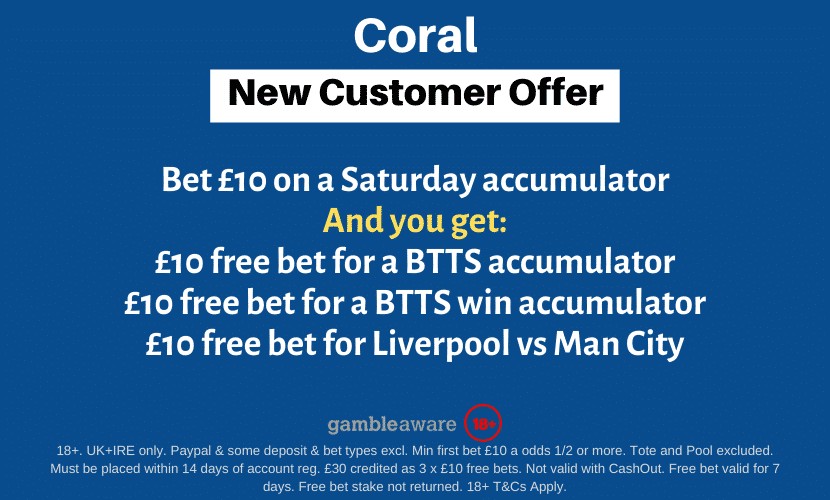 Saturday's both teams to score tips takes four selections from the Premier League, Championship and…