Burnley vs Arsenal betting tips and predictions for the 2:00pm kick-off in the Premier League on Sunday 2nd February 2020 with a 5/1 Bet Builder betting tip from bet365.

Burnley and Arsenal are two of fives sides currently sitting on 30 points. They will have had wildly different aspirations in August but right now there’s little to separate these two, now they meet at Turf Moor and you can see our betting tips and predictions below. 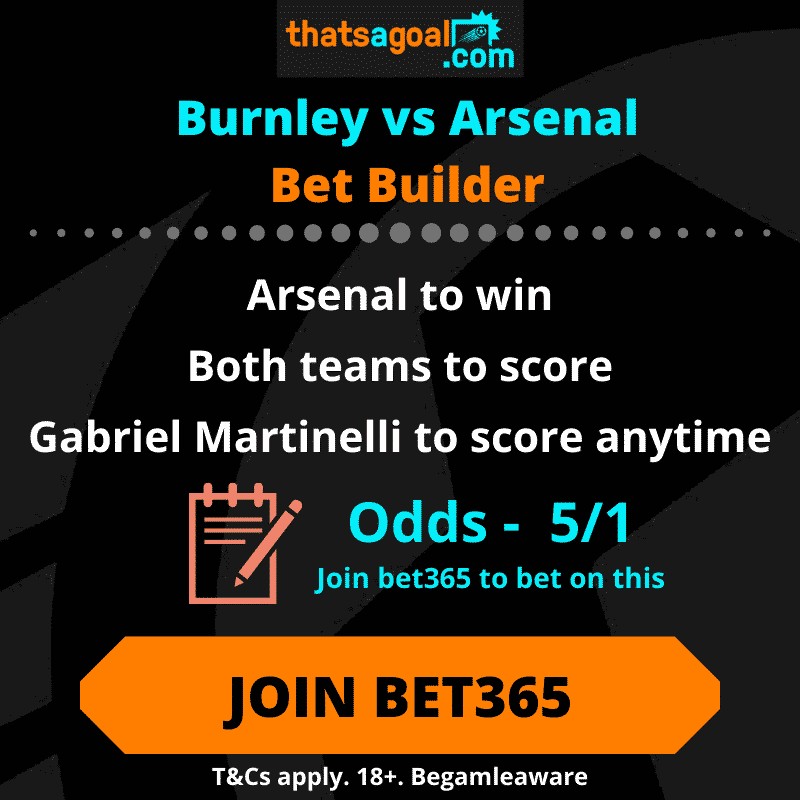 With bet365, you can add more than one selection to your bet on any match with their Bet Builder.

Simply pick the things you think will happen in the match and you’ll instantly get the odds for that bet, such as in the 5/1 betting tip we have picked out for Burnley v Arsenal.

You can bet on things such as anytime goalscorer, number of cards, players to be booked, BTTS, correct scores or which team will win, plus much more.

You need a bet365 account to place this kind of bet so open one using the offer below and get their £100 in bet credits sign-up bonus.

No side has drawn more than Arsenal’s 12 league games this season. Five of their last seven Premier League matches have ended all square.

Five of Arsenal’s last six league games have featured goals from both sides.

Burnley have won back-to-back games for the third time this season. The first two were followed up with three consecutive defeats.

The Clarets haven’t drawn a league game since September.

Martinelli stole the headlines with his late equaliser against Chelsea last time out. His side were down to ten men and losing with minutes left to play when the young Brazilian latched on to the ball in his own half and ran through on goal. That goal has taken Martinelli to ten for the season in his debut Gunners campaign.

Pierre-Emerick Aubameyang is set to return to the starting line up after suspension but Martinelli’s performances may see him keep his place in the starting XI. At the very least, Martinelli will feature from the bench and with goals in each of his last two league games, looks a good prospect to notch against Burnley.

Arsenal have played nine games against the teams currently placed 6th to 13th, seven of those featured goals from both sides, including their 2-1 win over Burnley back in August. The Gunners have only managed to keep four clean sheets all season and will need to contend with injuries in defense.

Meanwhile, Burnley have only been able to keep one shut out since Boxing Day. They have scored in four of their five home games since the start of December, including a consolation against Manchester City and two against third-placed Leicester.

Arsenal have found wins hard to come by for the majority of this campaign. There are positive signs under Arteta but there is still much work to be done. Burnley are level on points with Arsenal but find themselves three places below them in the table. The Gunners have lost just once to the current bottom-half teams.

Burnley’s form has been very cyclical this season. Sean Dyche has been unable to build on good results with their longest run without defeat coming in October. Since then their record reads LLLWWLLLWWLLLLWW. Another slump may well be on the cards after two more positive results helped pull Burnley away from relegation trouble for the time being.

3 bet365 will double that deposit with bet credits to spend

Read More: See what Charlie Nicholas and Lawro are predicting for this match.

Fulham vs Manchester United Bet Builder Tips: 10/1 Bet for the Last Match Before the World Cup

Manchester City vs Brentford Bet Builder Tips: Haaland to Help with this 12/1 Shot