Manchester United vs Wolves betting tips and predictions for the 5:30pm kick-off in the Premier League on 1/2/2020.

Both sides come into this level on 34 points with the gap to fourth currently at 6 points. Neither side have been consistent in recent weeks but Manchester United are slight favourites on paper. Read the betting tips and predictions for this fixture below. 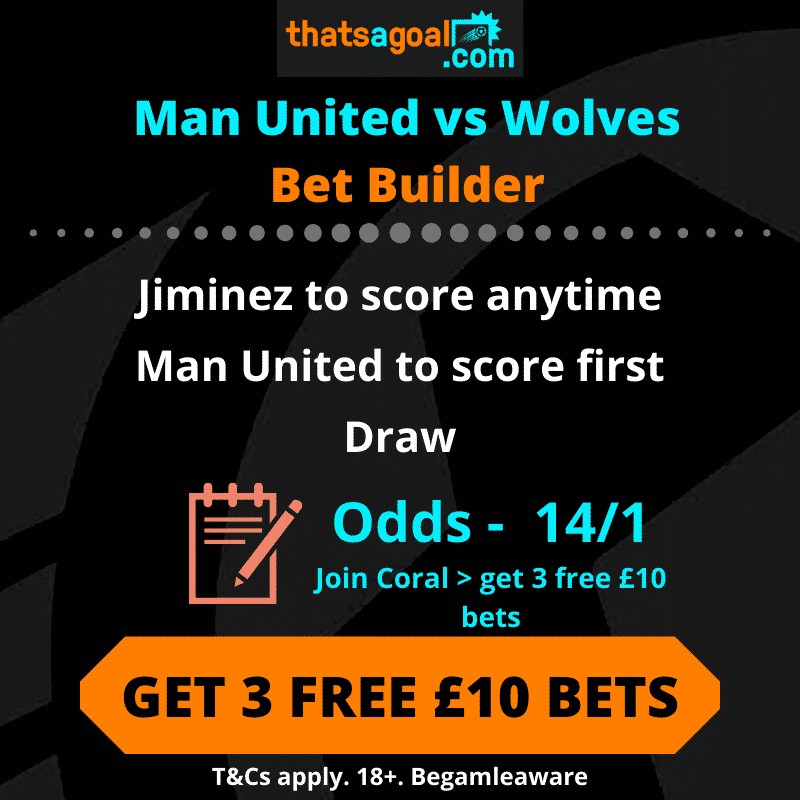 You can bet on all three of our Man United vs Wolves betting tips in one bet using the Coral ‘Bet Builder’ – for each match, select what you think will happen and Coral will instantly give you the odds for your bet.

You can add things like an anytime goalscorer, player to be booked, team to score first, total shots on target, both teams to score and much more.

Wolves have drawn ten times, eight of those ended 1-1.

Wolves have lost just three times in twelve away trips in the league so far this season.

Raul Jimenez has 11 Premier League goals this campaign, five of which came in his last seven matches.

Manchester United have lost three of their last four league games, including a home loss to Burnley last time out.

The Mexican forward took a little while to get going in the Premier League this season, but he is firing now. Wolves’ main man up front has scored 11 league goals with five in his last seven, including a brace against in-form Southampton. Jimenez also netted against Liverpool in Wolves’ last fixture.

Manchester United have conceded twice in three of their last four league games. Since the start of December, they have conceded goals to Watford, Newcastle and Burnley.

Incredibly, Wolves have conceded first in their last eight league games even though they went on to avoid defeat in five of those. Nevertheless, Wolves have been far from tight in defence all season and even without Marcus Rashford, Manchester United stand a good chance of scoring the opener at Old Trafford.

United have scored first in eight of their twelve Premier League home games so far this season. They have scored first at home to Liverpool, Leicester, Chelsea, Tottenham and Arsenal. No other side in the current top ten has opened the scoring against United at Old Trafford.

See what BBC pundit Lawro is predicting for this match.

With ten draws already under their belt, it would be no surprise to see Wolves take a share of the spoils once again. Only Arsenal have drawn more Premier League games this season. Five of Manchester United’s games against the current top ten have ended all square.

The Last time these two faced each other in the league the game ended 1-1 after Anthony Martial had opened the scoring in the first half. United have drawn seven times this season with four of those coming against the four teams currently placed 7th, 8th, 9th and 10th.