Both teams to score betting tips and predictions for the Saturday afternoon football fixtures this week. Using this sign-up offer will see you get the odds for your first bet doubled – so a £10 bet will return £150 rather than £80.

How to get double odds for a bet: 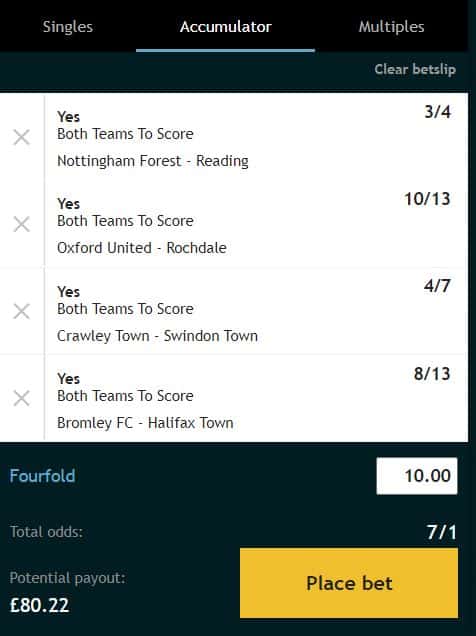 The appointment of Mark Bowen as manager seems to have rejuvenated Reading and they now visit top-eight team Nottingham Forest for another Championship fixture. That clash features in this BTTS Accumulator alongside free-scoring Oxford’s home fixture with an in-form Rochdale team. Both Crawley and Bromley also tend to feature in games involving several goals and their respective League Two and National League matches complete the four selections. Odds of approximately 10/1 are likely to be available for the successful outcome of these tips.

Following a winless sequence of six Championship matches, Mark Bowen was appointed as manager of Reading and they then claimed four points from their next two matches including a midweek 2-2 draw at QPR. It is also worth noting that the Royals have failed to net in just three competitive fixtures this term. Hosts Nottingham Forest are currently experiencing a mini-slump in form having lost two successive matches, but they failed to net a Championship goal for the first time this season when losing 1-0 at Wigan on Sunday.

Since drawing 0-0 at Bolton during mid-September, Oxford have regained their goal-scoring form with a vengeance scoring sixteen goals in five subsequent League One games and earning thirteen points. The U’s have also scored three times in each of their last four league matches at the Kassam Stadium and now host a Rochdale team which has netted at least twice in their four league games this month. Three successive victories have also been claimed by the Dale.

A 90th minute winner netted against Stevenage on Tuesday evening allowed Swindon to maintain a sequence of scoring in every game this month. The Robins have also scored at least once in each of their away fixtures in League Two action and now visit a Crawley team which has found the net in each league fixture since the beginning of August. Both teams have also scored in all of the latest seven league fixtures played by Crawley.

Since participating in a goalless draw at Chorley on the opening weekend of the National League campaign, Bromley have netted in every subsequent competitive fixture with both teams scoring in all but one of their games from late August onwards. A visit from Halifax now awaits and although the Shaymen have suffered some recent poor results on home turf, they have won five of their matches on the road this season. Halifax have also netted four times in three of their league games this term.

Join Grosvenor Sport today and get the odds for your first bet DOUBLED! You can bet up to £10 with this offer and the winnings will be paid to you in cash. For example, follow these steps to bet on our Saturday BTTS accumulator. 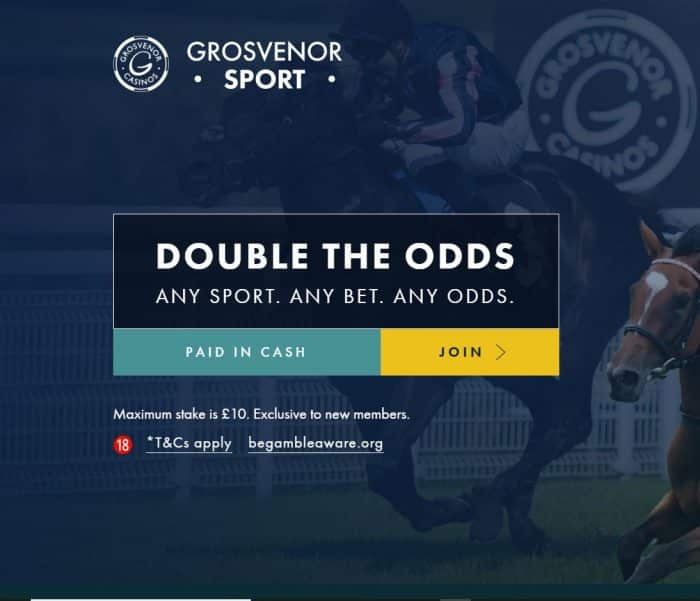