It’s another busy weekend of EFL action with a full set of fixtures taking place on Saturday. We’re hoping for plenty of entertaining this afternoon and have picked out four matches which should feature three or more goals.

888Sport are the bookies of choice for this bet, and they often have the best prices for Over 2.5 Goals markets. If you open an account you get £30 in free bets to use on this weekend’s action. 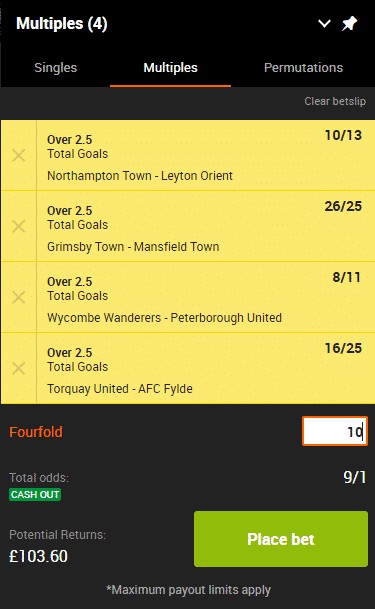 Last weekend, Northampton showed their defensive vulnerabilities with a late collapse against Morecambe. It’s the second consecutive week that the Cobblers have shipped late in the game, and that is clearly an issue for Keith Curle’s men. Each of the last six goals that they’ve conceded have come after the 70th minutes, and if they go ahead in this game – it’s no guarantee that they’ll hold out! They do score plenty of goals at home with 2-2-3 in their last three matches at Sixfields, and they should be able to find a way past this shaky Leyton Orient defence. The visitors were involved in an entertaining 3-3 draw last weekend, rescuing a point in the dying embers. There have now been 20 goals in Orient’s last five League Two matches, and with neither side defending well, this could be an entertaining 90 minutes.

Grimsby were excellent last weekend as they dispatched of a very impressive Exeter side at St.James’ Park. The Mariners have fluctuated between being excellent and unreliable this season, but Michael Jolley’s side do have goals in them. They’ve stuck five Port Vale, and have drawn 2-2 with Colchester and only needed a single goal in order to sneak past Macclesfield during their last encounter at Blundell Park. With Matt Green and James Hanson rested last weekend, they’ll be chomping at the bit to return to the side. Mansfield have scored just four goals in seven outings although they’ve conceded plenty over the last few weeks. Shipping eight in their last four is far from ideal, and they could struggle to keep the hosts off the scoresheet.

Wycombe were very efficient last weekend as they rattled three past Rochdale at Spotland. The Chairboys have been scoring plenty of goals, and they have a number of different players who are able to contribute. They’ve scored 14 times at Adams Park so far, and they should be able to find a way past Peterborough. Posh are scoring for fun at the moment, and they carved out numerous chances against AFC Wimbledon last weekend. Darren Ferguson’s men suddenly became nervous as their opponents found a way back into the game, and they looked far from secure at the back. They’ve conceded twice in each of their last three matches and they are far from secure. They are currently League One’s top goalscorer with 23 to their name, and with the likes of Mo Eisa, Ivan Toney and Marcus Maddison full of confidence, they should be able to find a way through.

AFC Fylde were hammered 4-0 in midweek and Dave Challinor must find a way of getting his side back on track. The boss is under pressure, and his side are looking very shaky at the back. Their away games contain an average of 3.71 goals per game and they’ve conceded at least two goals in each of their last six matches on the road. They face a Torquay side who have scored six goals in their last two matches, and their seven home matches have contained 21 goals so far. The hosts have plenty of goalscorers in their side with Jamie Reid having already scored nine time, and they should enjoy coming up against a dodgy Fylde back-line. Although they haven’t met since 2018, Fylde ran out 3-1 winners when they last met and we should get another entertaining 90 minutes of football on Saturday afternoon.

Cash out your accumulators.

Build your own football bets.

Read More: See this week’s BTTS tips and predictions or head to our football betting tips to get every tip on this weekend’s football.