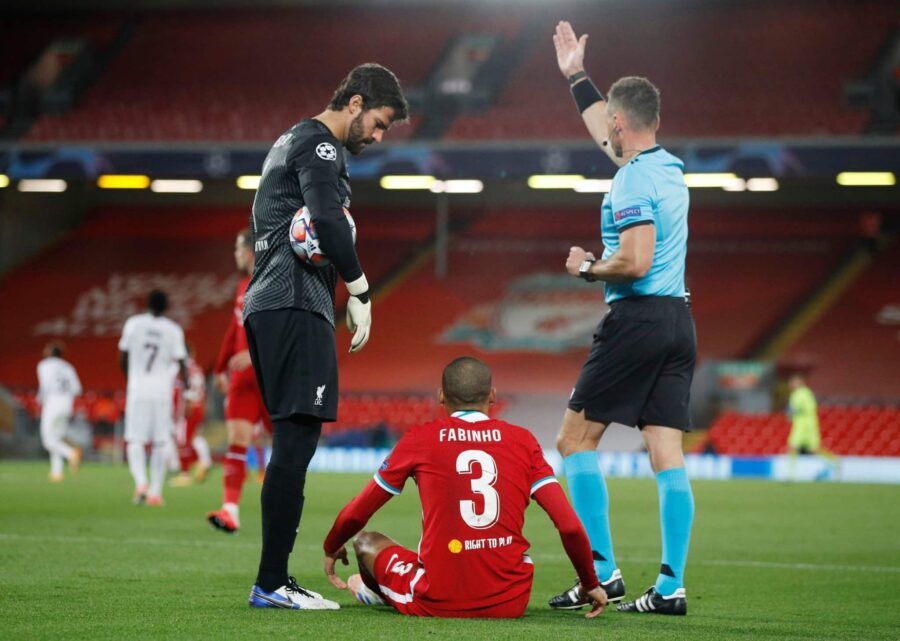 Liverpool’s troubles in central defense were made even worse with an injury to Fabinho against FC Midtjylland and Jurgen Klopp admitted after the game that the injury is “not good” and “exactly the last thing we needed”.

That news saw Liverpool’s Premier League title odds drift out to around 2/1 from 13/8 earlier in the day. Fabinho was expected to spend most of the season in the central defensive position as cover for Virgil Van Dijk, who was injured in the Merseyside derby against Everton.

Now however, Klopp is down to just one fit senior centre back in Joe Gomez. Joel Matip will now need to be rushed back to fitness to partner Gomez at the back, but Rhys Williams could be played there for the next couple of matches, with a home game against West Ham United coming up on Saturday in the Premier League.

“‘Exactly the last thing we needed!”

"Respect to Midtjylland. The pressing they set up today against the ball was incredible."

"Losing Fabinho was exactly the last thing we needed."

Speaking after the 2-0 win over Midtjylland, Klopp said:

“Exactly the last thing we needed! I don’t know… I know he felt a hamstring and that’s not good.

“[He] didn’t feel it that much, [he] said he could have played on but no sprints anymore which doesn’t help in that position obviously.

Klopp wasn’t sure how long Fabinho would be out for but with nobody to partner Gomez, even three or four matches could seriously dent Liverpool’s hopes of retaining the Premier League title which they won last season for the first time in 30 years.

Former Liverpool striker Peter Crouch was a pundit on BT Sport for the match and he said this is a huge blow to Liverpool’s season.

“Yeah this is huge, Fabinho’s been a fantastic replacement, looks like a hamstring,” Crouch said.

“Really disappointing, huge blow for Liverpool – you just hope to God that it’s not long-term.”

Liverpool are expected to have the results of Fabinho’s scans today but even if he is only out for a short period of time, it is going to be a testing few weeks for Liverpool. After West Ham, they play Atalanta and Manchester City in back to back away matches before a home game with Leicester.

Liverpool were favourites to win the Premier League title before the injury to Virgil Van Dijk but since then Manchester City have gone back to the head of the market (best odds 6/4 with William Hill).

After the news of Fabinho’s injury last night, bet365 pushed Liverpool from 13/8 to 15/8 and they are currently the best odds available for Liverpool to win back to back Premier League titles.

Who will replace Van Dijk & Fabinho?

Until Joel Matip is fully fit, Klopp has said that youngsters Rhys Williams, Nathaniel Phillips and Billy Koumetio will all join the squad and it is likely that Rhys Williams will play against West Ham at the weekend.

“He did really well.

“The only problem we have now is we have four days to the West Ham game and you will make every day a story of him and then he has to prove he can deal with that as well, because the vibe was calm around him.

“We have very young and inexperienced alternatives, and at the moment it looks like we have to choose one of them.

“I don’t know yet – but to be really clear and positive, Rhys was not in one situation tonight our problem, he played a really good game.”

Karim Benzema tells team-mates not to pass to Vinicius Jnr.

Free bets for betting on Liverpool to win the title.

With the Euro 2020 delayed by a year, the English team will go into the…

There are two more matches taking place in the Premier League tonight, starting with West…