Tottenham vs Borussia Dortmund predictions, betting tips and preview for Wednesday’s crucial Champions League last 16 first leg fixture at Wembley. Bundesliga front-runners Dortmund are 8/13 favourites to progress to the next round and will be looking to put down a marker in London.

Spurs were extremely fortunate to get out of Group B but surprised many when they took a point at the Nou Camp in December. That draw, coupled with Inter’s failure to beat PSV, was enough to see Tottenham reach the knock-out phase and set up a tie with German heavyweights Dortmund.

It must be said that this fixture would look entirely different were the hosts not without Harry Kane and Dele Alli. Instead, Spurs will be hoping that some of their more peripheral players can step up to the mark and gain a positive result before the away match in two weeks time.

This will be extremely tough for Tottenham although Mauricio Pochettino’s side may take confidence from the fact that they beat the Black and Yellows twice in 2017 – the last time they encountered one another. But there’s no doubt that the visitors have stepped up a gear since Lucien Favre took charge, as evidenced by them currently being five points clear of Bayern Munich in their domestic championship. I can see Dortmund causing Spurs a few problems here, particularly at the back, and wouldn’t be at all surprised if they avoid defeat at the very least. You can get 13/10 on the 2013 Champions League finalists drawing or winning in the double chance market, which is hugely appealing.

If Spurs are to get through to the last eight of the Champions League then the chances are they would have benefited from Son Heung-Min’s attacking flair at one point or another. The South Korean scored the third and final goal in Spurs’ 3-1 victory against Leicester on Sunday and he’s been crucial in keeping his club’s season alive since returning from the Asia Cup. Harry Kane aside, no other player has scored more goals for Tottenham than Son this season – which is becoming a bit of a theme. You can get 9/4 on him registering at some stage on Wednesday which looks good value given that he’s an absolute cert to start.

Dortmund’s domestic league match against Hoffenheim was a rare blip in an otherwise excellent campaign, but gives Spurs fans a bit of an insight into how Wednesday night’s fixture could play out. It’s no secret that the German giants love to attack and they’re comfortably top scorers in the Bundesliga this season. With that said, the manner in which they conceded three goals without reply to surrender two points will be of huge concern to Favre – which Spurs can take encouragement from. Both teams to score looks an absolute banker here and there could easily be four or five goals if things play out as many expect. You can get 5/4 on each side bagging a goal with at least three strikes in the 90 minutes.

Choose your odds – get 11/1 for Tottenham to win tonight OR 16/1 for Borussia Dortmund to win. 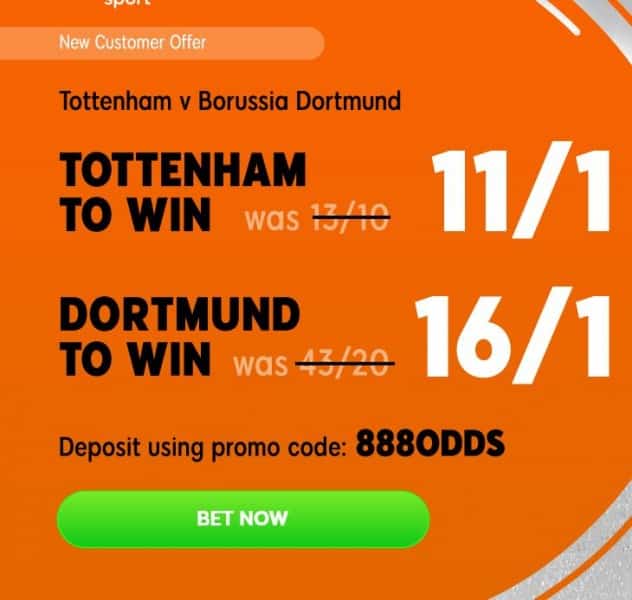