Manchester City are 90 minutes away from the Premier League title and only Brighton stand in their way. But how will Pep Guardiola line-up his side at the AMEX Stadium today?

The season all boils down to this, Manchester City know a win will guarantee them the Premier League title, or just bettering Liverpool’s result against Wolves will keep the trophy in Manchester.

This will be one of Pep Guardiola’s most important team selections he has ever made and there are a few names guaranteed to be on the Manchester City starting 11 for today’s game at Brighton.

One man who could feature is Kevin De Bruyne, but he is unlikely to start such an important game given his injury troubled season, and lack of game time recently – he could be one for the FA Cup final against Watford next weekend.

Vincent Kompany has been sensational in recent weeks and his wondergoal against Leicester ensured the title race stayed in City’s hands, but we’re predicting John Stone might to come into the starting 11 here given that City will have most of the possession. Although Laporte could be the one to drop out also.

There is every chance that the team will stay the same from the Leicester game, but one expected change will be that talented youngster Phil Foden will drop out and Bernardo Silva will move into midfield, this gives Leroy Sane the chance to start on the left wing. Sane wasn’t too impressive against Leicester but his direct style can get Man City the early breakthrough they will crave. 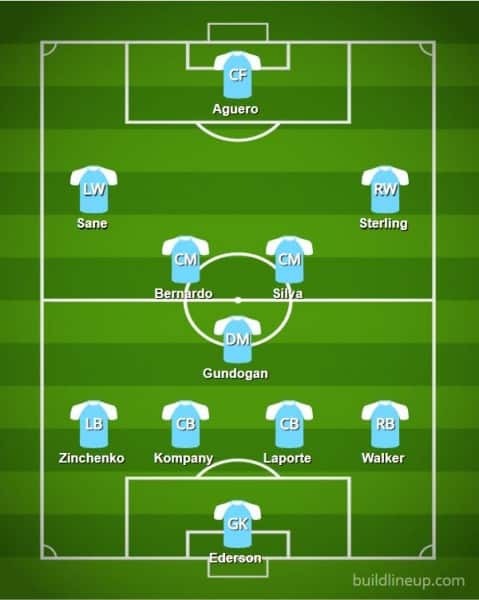 Open a new MoPlay betting account and bet £1 on Manchester City to beat Brighton today – if they win, you’ll get 2 free £10 bets added to your new account.