England travel to Montenegro for tonight’s Euro 2020 qualifying match off the back of a convincing 5-0 win against Czech Republic at Wembley, a match where Raheem Sterling bagged his first hat-trick for the Three Lions. Can they get another three points? See our match preview, betting tips and predictions below.

The first of our Montenegro vs England predictions is for the visitors to win this match to nil. They have been good in the last few qualifying campaigns and kept a clean sheet in four of their five away World Cup qualifying games, as well as four of their five Euro 2016 qualifiers. Montenegro aren’t expected to pose much threat to England here and the odds for an England victory are just 1/3. The hosts drew 1-1 with Bulgaria in their opening game and did win two of their four World Cup qualifying matches at home, but they were against much weaker opposition that England in Armenia and Romania – they lost to Poland and Denmark (to nil).

The first of tonight’s Montenegro vs England predictions is for an England to win to nil and the best odds for this are currently Evens at Ladbrokes.

The 1-1 draw that Montenegro picked up in Bulgaria on Friday night really should have been a victory, but Bulgaria were given a late penalty when the foul was obviously outside the box and those two points dropped could have a lasting effect as we go deeper into Euro 2020 qualifying. It looks set to be a battle between Czech Republic and Montenegro for second spot in the group behind England, so manager Ljubiša Tumbaković will rightly feel aggrieved by this.

England are full of confidence after a fantastic World Cup and Nations League campaign and have the finals to look forward to this summer – Raheem Sterling, Harry Kane and an own goal led them to a 5-0 win on Friday meaning their Euro 2020 qualifying campaign got off to the best possible start too. England won’t play again until the Nations League finals in Portugal so they’ll want to go to that with six points in the bag and we’re predicting they’ll do exactly that tonight.

Harry Kane is always an obvious choice for a first goalscorer bet and tonight is no different, he’s short in the betting, as expected, and just less than Evens to score anytime in the match. Raheem Sterling will look to continue his recent England scoring record and with Jadon Sancho providing service like his did for the opening goal against the Czech Republic, who would back against Sterling getting another goal tonight? At best odds 7/4 with bet365, Raheem Sterling is the second of tonight’s Montenegro vs England betting tips as an anytime goalscorer.

England are now unbeaten in their last 18 qualifying matches and it is hard to see that changing against this Montenegro side. Although they do put in the odd good performance, Gareth Southgate has got England playing some brilliant football and with the attacking front three of Sterling, Kane and Sancho all expected to start again tonight, we’re backing a comfortable and professional England victory for our correct score prediction on the match. England to win 2-0 in Montenegro completes tonight’s Montenegro vs England predictions and the best odds for this at the time of writing are 5/1 with Betfred.

Stefan Savic of Atletico Madrid is one of their star players but he is out with a knock tonight – greatly hindering their chances of a clean sheet.

Their other star man is Stefan Jovetic and he is also inured for tonight’s game with a knee injury.

The squad is not blessed with stars and these two will be greatly missed tonight.

Eric Dier picked up an injury early on against Czech Republic and missed out.

That could mean a start for Declan Rice or Ross Barkley.

Jordan Pickford will keep his place in goal as will fellow Everton player Michael Keane in the back four.

Marcus Rashford is also out injured but Sterling, Kane and Sancho will start, with Dele Alli in behind.

Open a new Betfred account and bet £10 on the match > win or lose you will get a free £30 bet added to your account, for example:

1 Hit this link to Betfred and sign-up for free

3 You get a £30 free bet added automatically 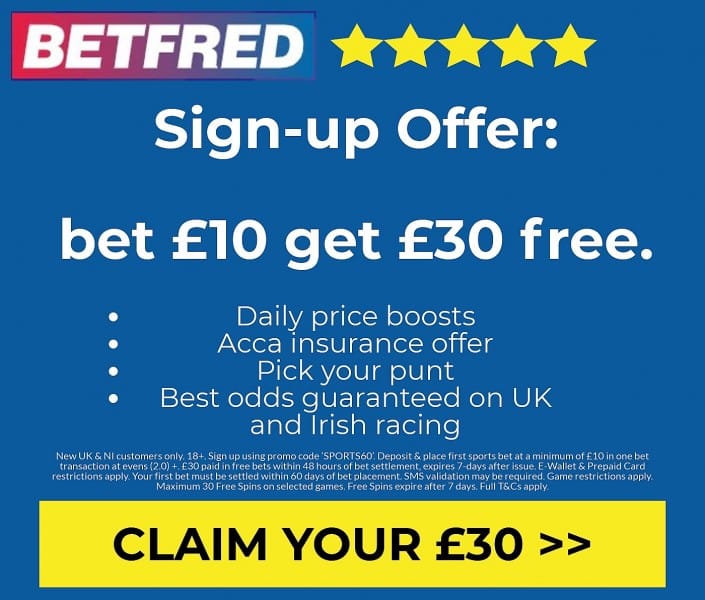