Chelsea vs Manchester United predictions, betting tips and preview for tonight’s FA Cup fifth round clash. This season’s competition is wide open with many of the top teams already out, the winner of this match will be second favourites to win the FA Cup. See our predictions and betting tips below.

The hosts are favourites to win this match at 10/11, but that is not a bet that appeals to our tipster in the slightest. Manchester United ran out convincing 3-1 winners at the Emirates Stadium in the last round and have been handed another tricky assignment here, however they are playing Chelsea who are in a rut of bad results and bad performances. Chelsea fans will point to the 5-0 win over Huddersfield but against the better sides, they’ve lost 2-0 against Arsenal, 6-0 against Manchester City and were humiliated 4-0 by Bournemouth. PSG were too good for United in the Champions League last week but that shouldn’t detract too much from the start Ole Gunner Solskjaer has made as temporary boss. The first of our Chelsea vs Man United predictions is for Man United to win the match in normal time.

Paul Pogba has been getting all the headlines for Solskjaer’s Man Utd side – even when he didn’t score against PSG he stole some of the headlines with a sending off in the last minute. However, the Frenchman has to stop scoring eventually and we’re going with one United’s other attacking players to score tonight. Both Anthony Martial and Jesse Lingard are expected to miss this match so Alexis Sanchez should start. He’s not had a good time at Old Trafford but it’s not in his nature to stop trying and with injury worries for attacking players tonight, Solkjaer will need Sanchez to step up to the plate. His poor form means we get an attractive 19/5 for him to score anytime and that goes down as the second of tonight’s Chelsea v Manchester United predictions.

Chelsea ran our 3-0 winners against Championship side Sheffield Wednesday in the last round, but this will be a much tougher test against one of the big teams in the Premier League. We’re already tipping a Man Utd win in our earlier betting tip and we’re going to back that up with a 2-1 away win from the correct score odds. With William Hill we’re getting an attractive 14/1 for this bet and that is certainly appealing.

It is hard to see why the hosts are favourites for tonight’s game given the domestic form of both teams. It is fair to say that Man United have a couple of important players missing in Jesse Lingard and Anthony Martial, but the chances are that Marcus Rashford will move wide and Romelu Lukaku and Alexis Sanchez will slot into the side.

Chelsea manager Maurizio Sarri is a man under pressure and he’ll need Edin Hazard to be at his brilliant best tonight, he’s 9/2 with bet365 to score first or for a safer bet take the 13/10 he scores anytime in the match.

We’re already going for a 2-1 Man United win in our predictions and betting tips but if you think it’ll be a draw then 1-1 looks the most likely result and that’s best price 13/2 with Bet Victor.

Get 20/1 for Chelsea to win tonight – winnings paid in CASH. 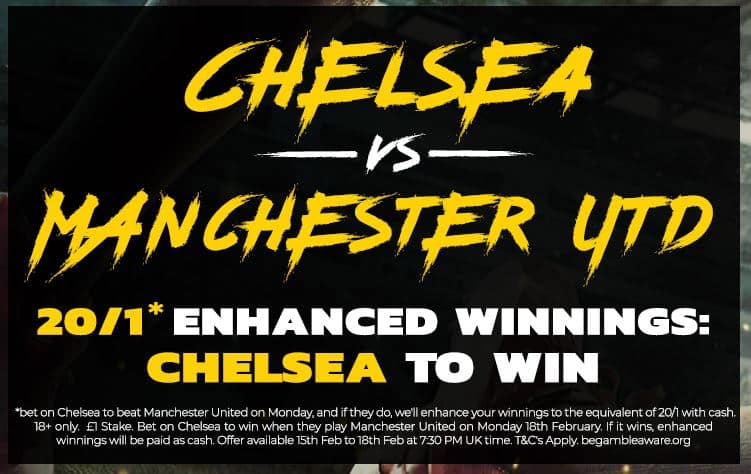