Football accumulator tips for this weekend’s Saturday matches including the reasons for each pick and which bookmaker to use on our accumulator bet.

Premier League and Championship action return to the weekend football coupons and matches at Queens Park Rangers and West Brom have been selected for this Saturday Accumulator. For the other games, both Borussia Monchengladbach and Bayer Leverkusen are seeking a top-four Bundesliga position and their away fixtures are featured alongside decent home team Athletic Bilbao in La Liga. Odds of approximately 14/1 will be available for the successful outcome of these matches. 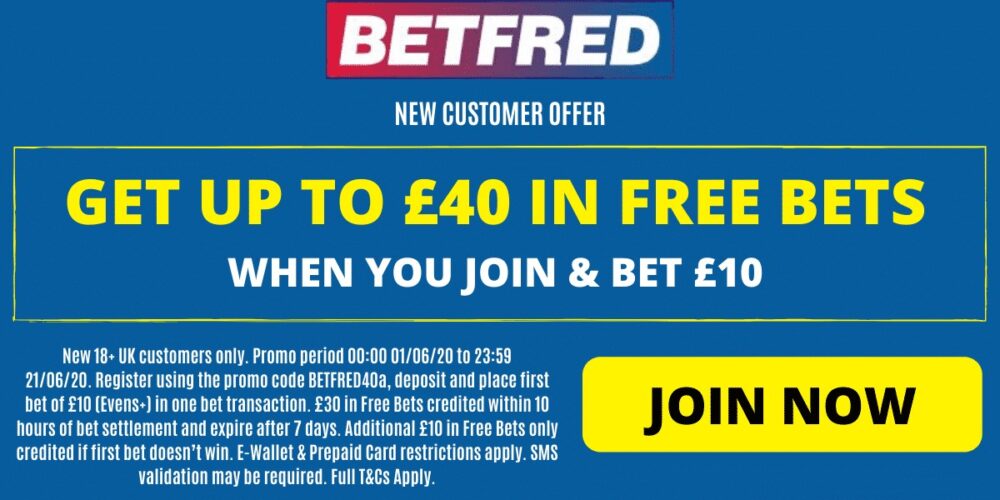 Before you bet on this weekend’s accumulator tip, get the Betfred sign-up offer which will give you a £30 free bet for tomorrow if you sign-up and bet £10. You will also get a £10 refund if your first bet loses.

Avoiding relegation from the Championship will be a difficult task for Barnsley although they showed some signs of spirit when winning three successive matches during February. However, the Tykes have won just one other league game this year and lost their prior two fixtures before the lockdown. An away fixture at QPR now awaits with the hosts unbeaten in six league matches before the shutdown. Rangers had beaten Stoke and Derby at Loftus Road during February and are expected to collect another three points.

With Pep Clotet announcing he is leaving Birmingham at the end of the season, there is expected to be much uncertainty at St Andrews. The Blues were also winless in six competitive games prior to the lockdown and a lengthy unbeaten sequence in Championship action was ended when beaten 3-1 by Reading in their final match of March. For hosts West Brom, promotion is the priority and they were a useful team at the Hawthorns for the first part of the season. Since the New Year, there has been more inconsistency but they claimed five league wins during February and are tipped to win this encounter.

During the four games following the resumption of Bundesliga activity, Hertha Berlin were one of the in-form teams as they collected ten points from four games. Yet since the beginning of June, the capital city team have lost all three fixtures with their recent 2-1 loss at Freiburg a particular disappointment. Bayer Leverkusen now visit Berlin with Champions League qualification within their grasp if they win their remaining two matches. An impressive 3-1 midweek victory against Koln was a fifth victory in eight competitive fixtures for Bayer and they could claim another three points against out-of-form hosts.

Inconsistency has plagued Borussia Monchengladbach since the resumption of Bundesliga activities, but a 3-0 midweek home win against Wolfsburg was a welcome return to form and a boost for their Champions League qualification hopes. A visit to Paderborn is their penultimate fixture and the relegated hosts are winless since the end of January. 5-1 and 6-1 losses in their last two home matches is not a good sign and they could suffer another defeat against their stronger visitors.

Two score draws since the resumption of La Liga activities ensures Athletic Bilbao remain unbeaten in league action since the beginning of March and they have lost only two league games at San Mames all season with Barcelona losing twice at the venue since the beginning of August. Real Betis are the next visitors and a 2-1 win at Mallorca during late November is their solitary victory on away soil in La Liga action this term. Just one clean sheet registered in ten previous outings is another concern for the visitors and a home victory is tipped.