League Two accumulator tips for this weekend’s Saturday afternoon 3pm fixtures including the reasons for each tip and the best bookmakers to use on the bet. We’ve picked out three sides who should collect three points in the fourth tier.

We use 888Sport for our accumulator tips because we can pre-populate the betslip for you, meaning you don’t have to add each selection in by yourself. If you need an account with them, you’ll also get 3 free £10 bets when you join 888Sport via this link. 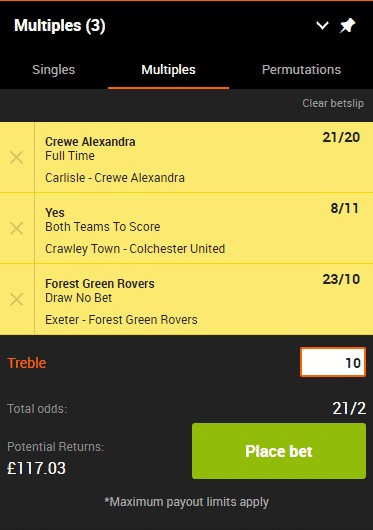 Crewe have been excellent under Dave Artell this season and they should continue that fine form at Brunton Park on Saturday. The Railwaymen have an excellent blend of youth and experience in their side and the likes of Tommy Lowery and Charlie Kirk are capable of moments of magic. The wise head of Chris Porter up front is also proving very effective and the 35-year old is showing no signs of letting up. They sit fourth in the League Two table and have only lost three times this campaign with Newport and Cambridge (rather unfairly) the last two sides to topple them. They’ve taken seven points from a possible nine in their last three away matches and should continue that run here. Carlisle are quite tough to beat at home although they were undone by both Mansfield and Exeter. They frustrated Forest Green and picked up a goalless draw although Crewe have a little more about them moving forward. The visitors have a good chance of taking all three points back to Cheshire.

Crawley vs Colchester – Both Teams to Score? Yes

Crawley have just started to drop off the pace in recent weeks and have won just once since the end of August. A major problem has been their defensive play which has seen them concede ten times in their last four games. They have kept three clean sheets at home this campaign, but their recent performances have suggested that they are unlikely to achieve another shutout anytime soon. The one thing that Crawley do have in abundance is firepower and although Bez Lubala has grabbed the early season headlines, they have other players who are perfectly capable in the final third. Ollie Palmer offers some much need aerial prowess whilst the excellent Panutche Camara has clocked up four assists so far this campaign and averages over two shots per match. Colchester arrive in decent form and they have climbed up to eighth. They’ve scored nine times in their last four League Two matches and are without a clean sheet in three. This should be an entertaining one.

This is a superb contest between two of the divisions early pacesetters. Perhaps surprisingly, FGR are riding high and have made themselves incredibly difficult to beat. They’ve kept eight clean sheets in twelve matches and won their last away game at Salford (0-4). They are unbeaten on the road since being defeated at Vale Park on August 20th, and also haven’t conceded a goal on their travels since that trip to Burslem. Exeter have made a decent start to the campaign and Matt Taylor’s side are deservedly challenging. The boss bemoaned his side’s cutting edge last weekend and that could be a problem against the division’s meanest back-line. The Grecians have only won one of their last five matches, and are winless in three coming into this tie therefore the value appears to lie with the away side.

How to get 3 free accumulators from 888Sport:

Read More: We’ve also got the best bets from the  League One this weekend