Championship Treble – Betting Tips to win £57 from £10 on Saturday

Championship accumulator tips for this weekend’s Saturday afternoon 3pm fixtures including the reasons for each tip and the best bookmakers to use on the bet. We’ve picked out three bets which will hopefully boost our betting balance this weekend.

We use William Hill for our Championship best betting tips because we can pre-populate the betslip for you, meaning you don’t have to add each selection in by yourself. If you need an account with them, you’ll also get their bet £10 get £30 in bonuses sign-up offer to spend this weekend on any other division. 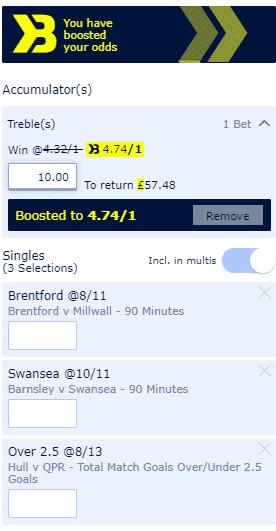 Brentford haven’t been the most reliable side at Griffin Park this season with the Bees drawing too many games in West London. However, there’s been a notable upturn in their recent performances and they should be able to get the better of Millwall. Thomas Frank’s men have created chances galore this season, but have struggled to finish them off. Sergi Canos and Said Benrahma have had a combined 52 shots so far this campaign with neither managing to get on the scoresheet. At some point, they’re going to get a stroke of luck. They are also incredibly tough to break down on their own patch and have one of the best defensive records in the league. They’ve conceded just three goals here in their opening five matches and Millwall could struggle to break through. The managerless Lions have always tended to struggle at this ground and with only three wins in their last 31 away trips, they may head back across the capital with nothing to show for it once again.

Barnsley are another managerless side who find themselves at the bottom of the table. The Tykes and Daniel Stendel parted way prior to the International Break and his successor has yet to be named (at the time of writing). The South Yorkshire club have struggled in front of goal this campaign and are the lowest scorers in the division with just eight goals to their name. Some of their defending this season has also been concerning and the new boss will have to go to basics when he arrives. It’s all going fairly swimmingly in South Wales with Steve Cooper enjoying life at Swansea. Although they were beaten by Stoke at the Liberty two weeks ago, they’ve been far more effective on their travels and they should be able to collect another three points here. They’ve won three of five on the road and remain unbeaten so far. They’ve also faced some tricky ties with all five of their away days coming against sides who sit 13th or above. This should be much easier for the Swans and we’re backing them to get back to winning ways.

QPR have been one of the most entertaining sides in the division this season and praise must go to Mark Warburton for getting a tune out of his young squad. The R’s sit ninth in the table coming into this tie and have scored 18 times so far. Only West Brom, Preston and Fulham have scored more times than the West Lononders and they have a number of players who are capable of individual brilliance. They come up against a Hull side who have been a bit patchy, but have improved in recent weeks. Defensive problems had dogged them during the early part of the campaign and they didn’t keep a clean sheet until September 21st. Last time out, they were handsomely beaten by Huddersfield on their travels and need to find a way to bounce back. There have been fifteen goals in their last five Championship matches and QPR are a high-scoring side. This could be very entertaining.

If you open a new William Hill account and bet £10 on our Championship betting tips this week, you will get £30 in free bets to use across the rest of the weekend. This is in addition to any winnings you get if your bet is a winner. Join William Hill using the steps below:

Read More: We’ve also got the best bets from  League Two this weekend.