Crystal Palace vs Tottenham Hotspur betting tips and predictions for Sunday’s fourth round FA Cup clash at Selhurst Park. The home side scraped past Grimsby in the previous round to set up an all-Premier League affair against Londoners Spurs.

The Eagles unexpectedly made the FA Cup final back in 2016 – a match that infamously prompted an embarrassing touchline jig from Alan Pardew. Roy Hodgson would doubtless be delighted if his side was in the hat for the fifth round but retaining Premier League status surely remains top priority.

A loss to Manchester United is the only blemish on Tottenham’s record since the New Year but they’ll be without Harry Kane and Son Heung-Min for this weekend’s trip across the capital. Notwithstanding this, the North Londoners are favourites for this clash and certainly deserve to be so. You’d expect Palace’s immediate concern to be on their current position in the Premier League table but a home FA Cup tie provides Glaziers fans with a welcome distraction. There’s been much talk about Mauricio Pochettino and the need for him to deliver a trophy, with this season looking their best chance yet under his stewardship. At the very least, I’d expect them to get past Palace inside 90 minutes and with a generous odds-against price available, it will be difficult to resist getting involved.

Fernando Llorente netted a hat-trick against Tranmere Rovers in the previous round and is virtually guaranteed to lead the line for Spurs this weekend given the absence of both Kane and Son. The Spaniard put past his own goal against Fulham in his side’s previous match and was relieved to see that his unfortunate error ultimately didn’t cost Spurs any ground in their quest for an automatic Champions League spot. There’s no doubt that the former Athletic Bilbao forward possesses quality – particularly in the air – so there’s a very good chance he can capitalise on some of the dreadful defending that has so far plagued Palace’s season. Most firms are around the 6/4 mark on Llorente scoring anytime on Sunday but with 11/5 also up for grabs you’d have to think twice about ignoring.

Read More: Check out our FA Cup betting predictions or check out the latest football tips for today.

It doesn’t seem to matter which personnel Tottenham put out, they always look capable of scoring goals. Combine that school of thought with the fact that Palace have themselves notched in four of their last five matches – including three times at Anfield a few days ago – then you could be forgiven for thinking that both teams to score looks a shoo-in. I’ve already said I fancy Spurs to win the match inside 90 minutes and think they have enough fire power and attacking quality to be confident of doing so. Those who agree with me may be interested to discover that you can get 13/10 on both teams scoring and over 2.5 goals being registered during the match, which looks a tad lengthy on current form. Time will tell whether that’s the case!

2 Bet £10 on Crystal Palace vs Tottenham 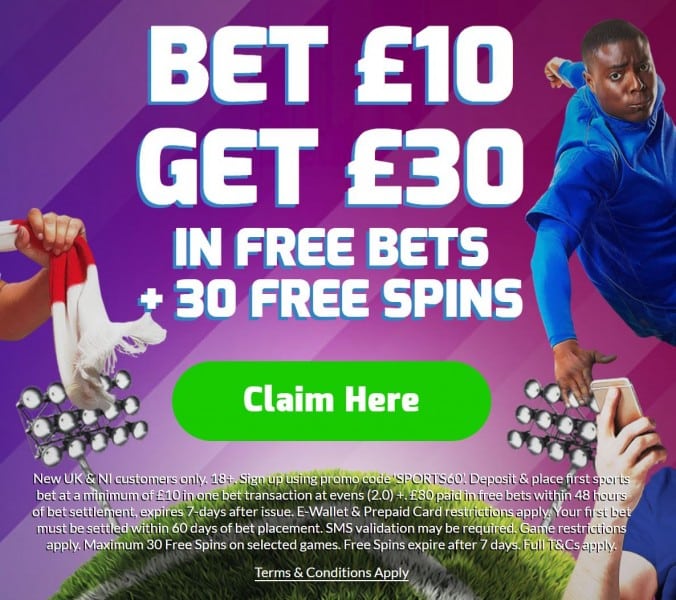