Football accumulator tips for this weekend’s Saturday afternoon matches including the reasons for each pick and which bookmaker to use on our accumulator bet in order to get 3 free £10 bets.

This direct link will add the five teams straight into your betslip and if you open an 888Sport account you’ll also get 3 free £10 bets to use on your next 3 accumulators. 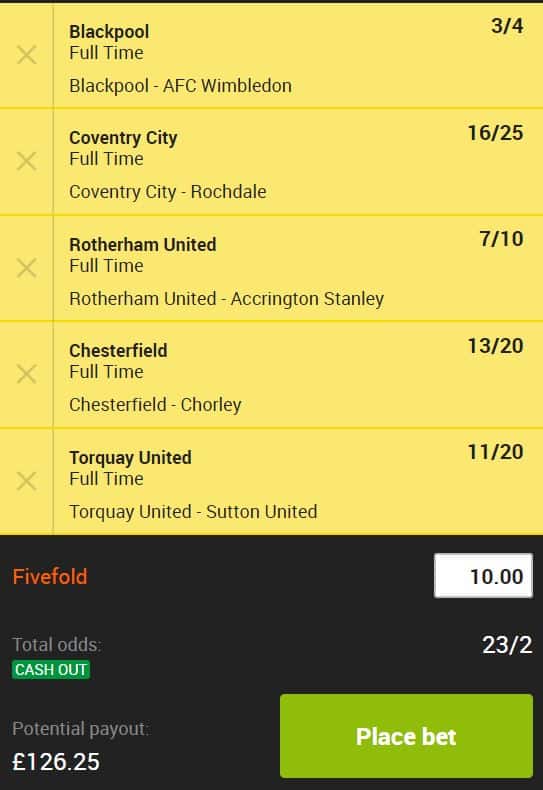 League One and National League games feature in this Saturday Accumulator with struggling fifth-tier teams Chorley and Sutton facing difficult away trips to Chesterfield and Torquay respectively this weekend. Meanwhile, Blackpool, Coventry and Rotherham will hope to complete home victories when hosting teams in the lower half of the League One table.

Three League One victories earned at the beginning of October helped earn Glyn Hodges the permanent manager job at AFC Wimbledon but the Dons have been winless in three subsequent matches. A second successive loss was avoided when scoring a late equaliser in a home draw with Lincoln but a difficult away trip to Blackpool now awaits with the hosts scoring four times in each of their last two matches. The Tangerines have been beaten just twice in league action at Bloomfield Road all season and could deepen the relegation concerns of Wimbledon by winning for a third time in five league home matches.

Although Rochdale have claimed three League One victories on their travels this season, all three wins have been earned against teams struggling in the current bottom six of the league table. A victory claimed at Bolton are the only points earned from the Dale’s last five league outings on their travels ahead of this away fixture against Coventry. The Sky Blues have lost just one league game at their adopted St Andrews home this season and they completed a second win in four competitive matches by sealing a 2-0 cup win at Colchester last weekend. Another home win is likely for Coventry.

Relegation fears continue to persist for Accrington Stanley and only a single League One victory earned on the road this term when beating struggling Southend 1-0 underlines just one of their current problems. A failure to find the net in three consecutive league fixtures is another issue ahead of this visit to Rotherham. The Millers have won their last three league games on the road but have suffered narrow defeats by Oxford and Wycombe in their two most recent home matches. Rotherham have faced some tough fixtures in the last few weeks but could return to winning ways at the New York Stadium by beating struggling Stanley.

Just one defeat suffered in eight National League matches followed by a 2-0 FA Cup victory against Spennymoor seemed to signal a change in fortunes for Chorley after a poor start to the campaign. However, there followed three successive league losses with at least two goals conceded and then a 1-0 cup defeat at Mansfield. The Magpies urgently need points in their bid to avoid relegation but now face a Chesterfield team beaten just once in their last five outings at the Proact Stadium and seeking a fourth win in five league matches. A fourth home win since mid-September is predicted for the Spireites.

Since beating Chesterfield 4-0 since mid-September, Sutton have been winless in all competitions and have lost their last four games on the road with no goals scored in their latest three National League away matches. United now travel to face a Torquay team seeking a fifth consecutive victory at Plainmoor. The Gulls have also netted nine goals in winning their last three league fixtures and could claim all three points from this game.

ADD THIS ACCA STRAIGHT TO YOUR BETSLIP