Tottenham vs Manchester City betting tips and predictions for the 4:30pm kick-off in the Premier League on Sunday 2nd February, plus a 6/1 bet builder betting tip to place.

Tottenham are looking to close the gap on Chelsea to just three points whilst Manchester City’s title challenge is almost certainly out of reach by this stage, they will want to finish second though and you can get our Super Sunday betting tips and predictions below. 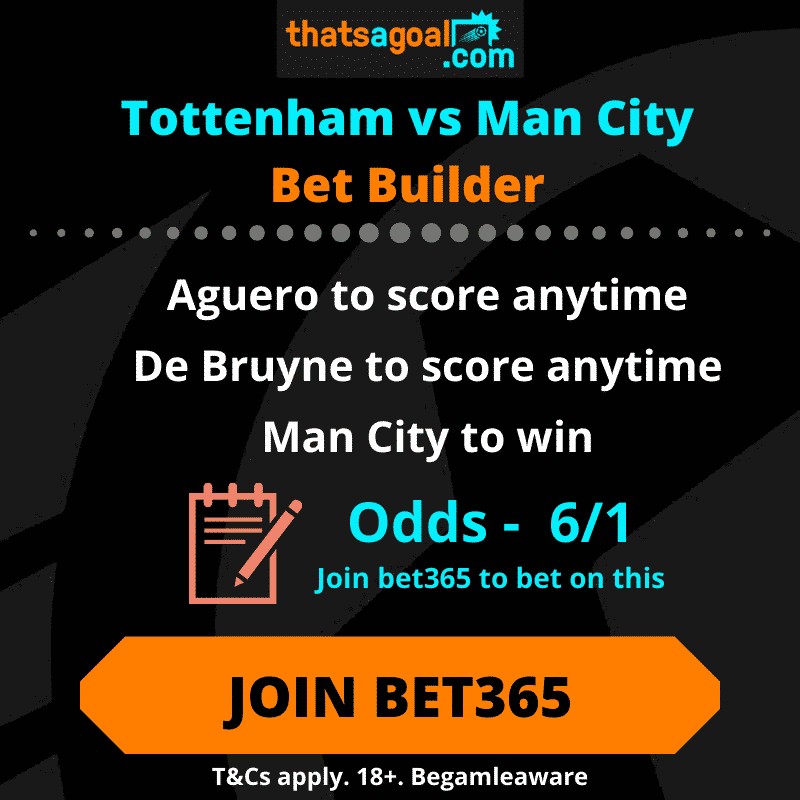 Spurs are yet to beat any side in the current top five this season. They have lost five and drawn one.

Tottenham have conceded two goals in five of their six games against the current top five.

Manchester City have only failed to score one occasion in the league this season. No side has scored more goals.

The last time these two sides met, the game ended in a 2-2 draw after Gabriel Jesus’ late winner was ruled out for handball by VAR.

Aguero has been prolific once again this season as he moves towards the top spots in the all time Premier League scoring charts. The Argentine frontman has scored 16 league goals this season and is looking back to his best after returning from injury.

Aguero has started three times since returning to action, scoring seven goals. He has averaged over two goals a game since making his return. The last time Manchester City faced Tottenham, Aguero was also on the score sheet.

The current frontrunner for the PFA Player of the Year award, De Bruyne has had arguably his best season in a Manchester City shirt. The Belgian has been remarkably consistent despite Man City’s dip in form.

KDB has hit seven league goals and is on track to surpass his best Premier League tally of eight. No player had more shots than De Bruyne in the last matchday and his more advanced position is certainly affording him more goalscoring opportunities. Tottenham’s poor defensive record only boosts De Bruyne’s chances of scoring.

The title challenge may be over for Man City but their players appear to be no less motivated. Guardiola’s side have gone five without defeat and have won six of their last eight league fixtures. During that period, they have put three past Arsenal, three past Leicester and six(!) past Aston Villa.

Hugo Lloris may have returned between the sticks for Mourinho but that is unlikely to be enough to stop City from breaching the Spurs backline. Tottenham have won just one of their last five league games, a narrow 2-1 win at home to bottom of the table Norwich. Guardiola looks to have the edge in this grudge match.

3 bet365 will double that deposit with bet credits to spend

Read More: see what Lawro’s prediction is for this match.